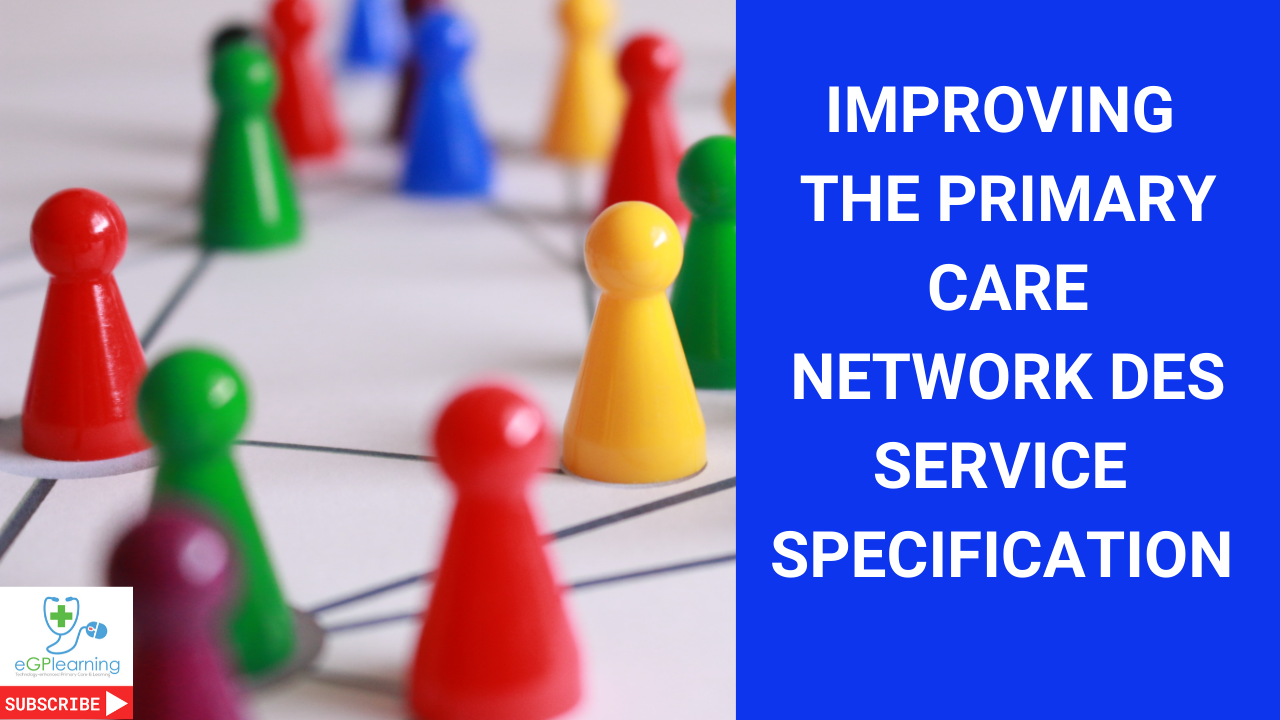 Check out my original review where I went through the DES: here--https://youtu.be/K1qwyxt63f0

Declaration – I am not involved in the negotiations. I am Nottingham City East PCN Clinical director but these are my own thoughts. For some backstory in 2015 I wrote a further Blueprint for Primary care : https://egplearning.co.uk/a-further-blueprint-for-primary-care/ with a colleague as Jeremy Hunt launched the five year forward view. Some of these aims have been achieved (indemnity) but much can still be done.

How to improve the DES- I will talk firstly about general changes and the headline points. Then each specification in turn with my more innovative (controversial) ideas at the end.

The release time of the specification has caused a lot of frustration. Even more so in the first webinar where little engagement was offered, just reading the spec. This led in part to one CD resigning live. NHSE doing an open consultation on the draft is a good thing. Feigning listening is not.

At points, the specification makes reference to evidence. In particular vanguard projects. However, it neglects to mention that vanguard projects have had significantly higher levels of funding for each aspect and therefore converting this to specifications for networks to follow is a fallacy.

You cant use a recipe that feeds four people that costs £10 and say provide the same meal for £2 all the time – even with using foodbanks.

The original outline of the DES was to stabilise primary care. This draft does not do this but further destabilises it by utilising the additional roles above the capacity of work the can create and negates the fact networks will be part-funding them. This was a poor way to show that NHSE/I was listening to the needs of general practice. Many comment the draft is intentionally too far to the right to allow any softening to be accepted as better than the original. This is a skeptics dream.

For this process to work- show General Practice that NHSE is truly listening. Much of this has been done amazingly by Dr Nikki Kanani and I do not envy her position. I am mindful of ‘do not shoot the messenger’ being very apt here.

Let’s move on. The following is a combination of my views and those from the various forums I engage in.

General practice. If I had control I would keep existing structures that could help foster better collaborative working and simply offer the resources to networks to use for their local area.

General Practice has proved to be the most cost-effective method of delivering healthcare currently doing 90% of the NHS workload for less than 9% of the funding. Trust the networks to deliver primary care with the simple metric of improving the health of the network population.

Ideally to fund the global sum but if not, then to the networks directly to use as they seem fit, to provide roles or services for better patient care along the 5 categories as best for their population.

However, we do not live in a world of trust despite GPs consistently being the most trusted role in the country.

So if working towards the confines of adjusting the existing DES and its specification let us have a look.

Worth looking at the Berkshire, Buckinghamshire and Oxfordshire LMC document link: https://drive.google.com/file/d/1Bj7hkuCQasbXs-Mk7MOKpDq-lfjl3YSK/view?usp=sharing

This outlines workload implications and makes the case for each average practice to lose £100k over the term of the network DES. My thoughts do align with some of this document, however, I do not agree with the principle of withdrawing from the DES at this point as this is still a draft version and the final specs may differ. It also does not include AFAIK  the overlap of patients in the DES which would reduce some of the work.

Other LMCs and organisations have also been verbal on their views including GPSurvival who have started a formal petition about the service specifications.

DOI I am the treasurer of GPSurvival.

Looked at this in my area. Patients on 10+ meds alone was about 5% practice population.

This specification could have been effective but its prescriptive and ludicrous nature truly raises questions about the aims of the specs. It outlines a staggering increase in workload and specifies being led by roles not funded in the DES ad only on a F2F basis. It also is discriminatory to frail patients who live in their own home.

Anticipatory care is manageable pending relationships with ICS, CCGs and ICPs, and if appropriate tools exist to support the population-based care. I will admit my knowledge gap in this area which leads me to my first improvement.

I mentioned in my first video this harkens back to the failed unplanned admissions DES for a few years back. The reliance on care plans and monitoring are lessons still not learned. However, this is the first mention of tackling inequality – albeit on a minor scale.

Much of this specification I find sensible in its aims. My only question is the time needed to action it given the repeat requirements for a lead and oversight.

So that is my suggestions for adaptations for the specifications. But what if we were rewriting it? These are suggestions for NHS England which are in their domain to consider but not covered in the existing DES.

What do you think?