Influenza. The flu. Oh how I hate thee…..

Flu season is in full force with this year expected to be particularly nasty. This on a background of an underfunded NHS with significant staffing, morale and resource issues paints a worrying picture.

So trying to safeguard ourselves from the flu should be a priority. One I failed on this year.

The annual cycle of flu vaccines came to our practice last week. Given I work with people at risk and in regular contact with those likely to attend with the flu seeking advice – I should have the flu vaccine (jab). This is to both protect myself and those I come in contact with (the concept of herd immunity).

One myth about the flu jab is that it gives you the flu. It doesn’t. The flu jab is an inactivated version of the virus that stimulates your body to create the antibodies (defence) to fight off the virus quicker if you were to become infected so the virus doesn’t cause a problem. It also significantly reduces the chances of you developing the nasty complications of the flu- like pneumonia and meningitis if you were to become infected. They pay off? A slight sore arm and possible mild temperature/ malaise – because your immune system is working. The flu jab unfortunately does not stop the common cold as there are hundreds of variants of viral infections, it just protects you from the most common versions of the current flu virus doing the rounds that year.

Unfortunately I was a little slack at getting it done before my planned holiday break. As you may expect, on day 2 of my break the sniffles started. Then came the sore throat and the brewing of a good going cold.

That night it was clear we had gone to Defcon 4 and I was suffering with the flu with the following :

Clearly this was an attractive picture. One non-evidenced based way of telling if someone has the flu is simply ask this question: ‘If there was £100 outside your house door, would you pick it up?’. If the answer was no due to how crap you were feeling from a viral illness, then you most likely have the flu.

So how did I manage myself? Friends and family all insisted on various options including herbal remedies, onion soup, multitudes of over the counter remedies, seeing a doctor and being put down. 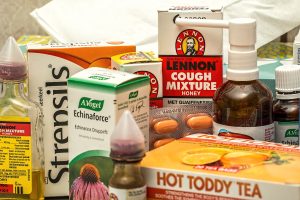 I did not choose any of these. I am fortunate that I have no chronic health issues and am of reasonable health (like many I could do with losing a little weight and exercising more). As a result I knew my body should easily be able to fight off the flu.

I simply stayed at home.

I avoided/reduced contact with those who the flu posed a larger threat (trickier with two kids).

I kept hydrated with regular sips of water, hot drinks or dilute juice pending what I could handle.

I took pain relief – paracetamol and ibuprofen (as able) for the aches and fevers when bad.

I occasionally took a simple decongestant/ menthol balm or sweets to open up my breathing. Admittedly it was symptomatic relief but it felt good to have a few minutes of air flowing through my nose and being able to smell briefly – apart from when I had to change my daughter’s nappy.

All these helped. But what helped the most – I rested and slept. The reality was my body needed to fight off the viral infection that is the influenza virus and the best way to do that is rest. 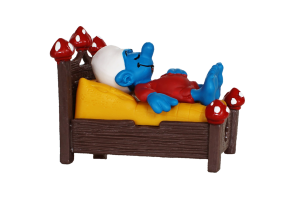 On reflection resting is the one treatment modern society does not make room for.After suffering for a week (and still trying to shake off the remnants) I know that a decent night’s sleep or two would be a far better treatment than anything an apothecary or pharmacist might offer.

Whether it childcare, education, social life or work – we have no time to be ill. This can sometimes lead to people taking darker paths.

During my time as a GP I have had many contacts with patients/parents who have come with viral illnesses. In the UK, most upper respiratory infections are viral in origin due to our existing hygiene standards and sanitation in comparison to other areas like developing nations. The reality with most viral infections is that there is no magic treatment. While there are some treatments that may help a susceptible individual fight off the infection like Tamiflu, these come with significant possible side effects such as, stomach upset, sudden confusion, delirium, hallucinations, unusual behaviour, or self-injury. One thing that does NOT work for viral infections are antibiotics. This is because they treat bacterial infections. The flu is a virus. Simples.

Unfortunately many patients still feel that antibiotics may give them some salvation despite having a viral infection. One common explanation is ‘ I had antibiotics last time and I got better.’ The average length of a viral illness is 1-3 weeks. The average course of antibiotics is a week which most people obtain normally after a few days to a week after an illness starts. So, it is clearly possible the patient had a virus that settled without the need for unnecessary treatment. Perception is a challenging thing to break however, as a result some patients resolve to use unpleasant tactics. In my time I have had patients use emotional blackmail -that I am making them suffer, that if I do not prescribe antibiotics then they will complain to one of the many possible organisations around primary care, or threaten me verbally, financially or physically unless I issued them antibiotics.

Pointless really. Threats do not make me change my clinical advice. Also the main edict of a doctor is do no harm. By issuing antibiotics for viral infections you are more likely to expose the patient to side effects of the treatment or drive the global emergency of antibiotic resistance. We already have a gonorrhoea superbug which thankfully is not as transmissible as influenza. Today the Chief Medical Officer Dame Sally Davis has issued a stark warning to the dangers of anitbiotic resistance stating it is a worse health threat than cancer.

England’s chief medical officer has renewed her warning about what she’s described as a “post-antibiotic apocalypse” #r4today pic.twitter.com/3EAUvmOTAv

So in short, if you are demanding antibiotics when you do not need them (like for the flu or other viral illnesses), you are helping to kill off the human species.

If you do want to survive the flu there are simple things to remember:

This is a simple guide with a few opinions. I wonder how many will accept them.