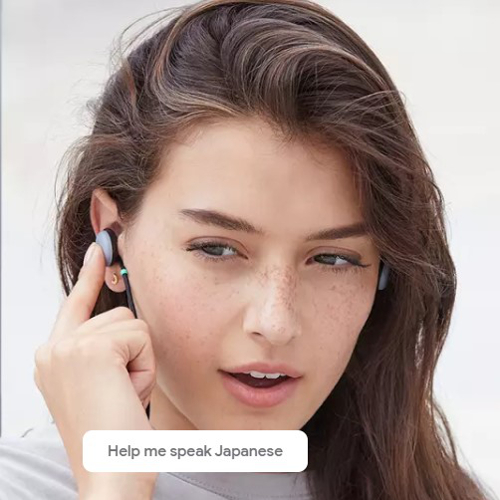 This week Google released details on the company’s  new hardware ventures. These included the high quality Pixel 2 phone and a new Google Home smart speaker. However for me, the most surprising release was the Google Pixel Buds. These are wireless headphones of the ilk of Apple’s AirPods which released last year with the then new iPhone.

They are simply wireless connection headphones to pair with your Pixel device as there is no longer a headphone jack on the new Pixel. The reason the Google PIxel Buds are causing such a stir in the tech world, is the real time translation mechanism in the device, effectively making it into a modern era Babel fish. For those unaware of the Hitchhikers Guide to the Galaxy, a Babel Fish is a fish placed in your ear that acts as a universal translator by feeding off your brainwaves and decoding them. Other sci-fi franchises have similar equipment like the universal translator in Star Trek, or even the TARDIS in Dr Who.

But this is technology you or I can now use. Want to have look? Watch this video at the launch event.

Google Pixel Buds work with the 40 languages at present (although I have struggled to find the exact list of languages., even with asking Google themselves).

Clearly this has real world applications with breaking down language barriers. What I find useful is the possibility this may help with GP consultations. I work in an ethnically diverse urban practice with many different cultures. Embedded in the practice is the difficulty of having to consult with non-English speaking patients. The variety of languages spoke by our patients is spread from European particularly Polish, Portuguese and French, Eastern European, various Arabic dialects, multiple African languages like Eritrean and Somali, as well as sub Asian (Urdu/ Hindi/Punjabi) and even Vietnamese, Cantonese and Thai.

For solutions to this problem we have a local interpreter service but this is not useful in urgent situations as often interpreters are not available at short notice. Language Line is a telephone based translator service that has ‘instant’ access. However often it can take over 10 minutes to filter to the right interpreter (no wonder we run late in seeing patients). This also brings in complexities of correct dialects, sound quality over phone/ speaker phones, consulting methods with a non-present individual and the time this takes and the problem of a dropped call. These services are not cheap as cost from $3.95 a minute, meaning a standard consultation of 10 minutes may cost about £30 just for the translation.

Using friends/ families may seem the more cost effective option, however this brings in questions about the integrity of the translation. Examples are:

So could Google Pixel Buds be an alternative?

There are concerns here. Firstly, the Care and Quality Commission are very negative to the use of Google translate in primary care, with previous comments that it should not be used.  This may be due to Google being involved and concerns about security and integrity of data if the Google system is used questioning data protection rights. I would argue if the patient themselves has offered to use the system because no other alternative is available then something is better than nothing.

Another concern about Google translate is the fidgety of translations. There are websites dedicated to situations where Google translate has gone wrong, similar to sites dedicated to when autocorrect typing has made mistakes. Arguably as the technology improves so will the translation and due to the data out there particularly European languages are reasonably well translated. Recently Google translate was used in the justice system due to lack of alternatives. This may raise issues of the responsibility of the translation, particularly if a clinical error occurs as a result. One option may be that if in doubt; ask short simple questions which are limited to yes or no or similar type answers. This may take considerably longer, but more likely to provide clearer transmission of understanding.

Finally issues about infection control of a device may be present, however if the clinician used their own set of Pixel Buds with the device held by the patient, this may offer a better consultation than no device or translator alone.

So what can they offer? Well at relatively low cost ($159) a set (although initially they will only work with a Pixel 2 handset) they are easily available and clearly portable. Given a reasonable battery life and quick to pair they may be a more rapid solution to Language line. If possible to record the conversation using the on board phone system, then a transcript of the consultation may also be saved in the record for fidelity of the translation.  Also the wow factor is not something to be understated at present.

Google Pixel Buds are clearly seen as a new option with translating languages. The understated reveal is also being considered a surprising draw and a potential winner in a market that was starting to develop following recent Kickstarter funded initiatives. However I think the Google Pixel Buds will outshine many of these by being linked to a household brand and cheaper ($159 a set).

Whether they can function as an alternative for primary care translation is yet to be seen, with some clear concerns about integrity of their use and function. As an early adopter of technologies I see some clear advantage of using them in my patient group, which would be considerably more cost effective and user friendly than existing systems. They may even be worth clinical commissioning groups considering funding for primary care to equalise access for patients, particularly if interpreter services are limited or costly.